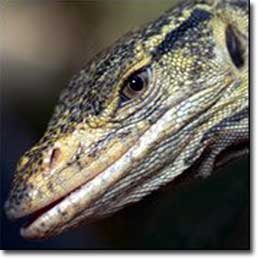 The Butaan, also called Gray’s monitor (Varanus olivaceus), is an extremely rare monitor lizard that lives in the Philippines. It is so rare that it was believed to be extinct until rediscovered in the 1970s.

The Butaan is the world’s largest fruit-eating monitor lizard, growing up to seven feet in length. Very little is known about them, but they have been the subject of a study that aired on Animal Planet — the first time they were ever filmed in the wild.

The Butaan has a reputation in its area of being delicious to eat, so they are under threat from hunting as well as critical loss of habitat.