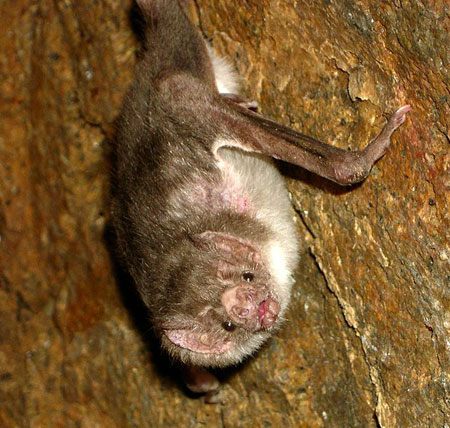 Vampire Bats. The name conjures images of Count Dracula and other vampires, eerie creatures of the night that suck blood from their victims that turn into vampires themselves. What would Halloween be if there were not these scary bats to frighten us? In reality, vampire bats are not very scary, but just as fascinating.

Fossil records show there used to be more species of vampire bats. Today, there are just three species. Two species prefer avian blood and are less abundant. These bats are the white-winged vampire bat (Diaemus youngi) and the hairy-legged vampire bat (Diphylla ecaudata). The most abundant and most studied vampire bat is the common vampire bat (Desmodus rotundus), which prefers mammalian blood. All three are found in the new world tropical and subtropical regions (Central and South America) and are considered medium sized bats.

~ From “Natural History of the Vampire Bat” by Denise Tomlinson