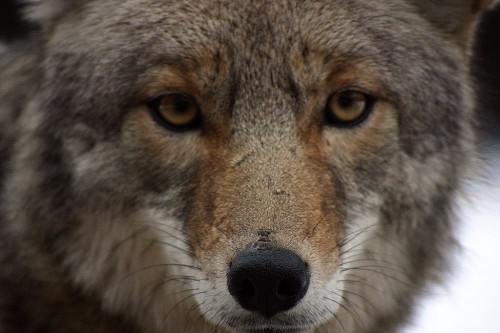 The coyote (Canis latrans) is one of the most widely known and disparaged wild animals in the United States. But, the coyote is a survivor. Unlike its cousin the wolf, the coyote’s range has expanded in the wake of human civilization, and coyotes readily reproduce in metropolitan areas.

The name “coyote” is borrowed from Mexican Spanish coyote, ultimately derived from the Aztec word cóyotl, meaning “trickster” (which is the coyote’s reputation in several Native American cultures). Its scientific name, Canis latrans, means “barking dog” in Latin. Evolutionary evidence suggests that unlike the wolf, the coyote evolved in North America. Currently, 19 subspecies are recognized, with 16 in Canada, Mexico, and the United States, and three in Central America.