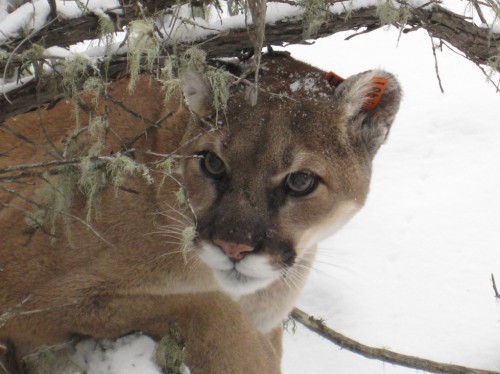 The mountain lion (Puma concolor) is the largest cat in North America and the second heaviest in the New World, after the jaguar. It is probably also the cat with the most names: cougar, mountain lion, puma, panther, painter, mountain cat, or catamount. Its range, from the Canadian Yukon to the southern Andes of South America, is the greatest of any large wild terrestrial mammal in the Western Hemisphere. An adaptable, generalist species, the cougar is found in most American habitat types. The mountain lion is more closely related to smaller felines, including the domestic cat (subfamily Felinae), than to any subspecies of lion (subfamily Pantherinae).