Thanks to the efforts of The Georgia Department of Natural Resources and The Florida Fish and Wildlife Conservation Commission a young endangered right whale has been given a second chance at life. 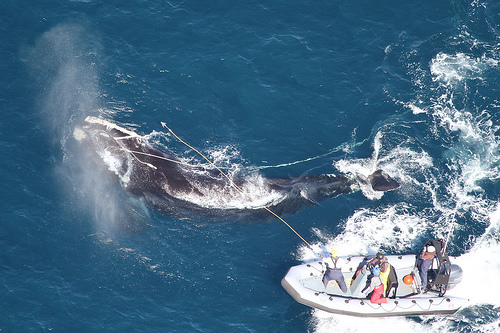 The four year old male whale, known as No. 4057 was dragging 100-plus yards of weighted rope. After several attempts, a team of biologists cut away most of the rope. They could not remove all of the rope because the whale avoided the boats and because the rope is likely entangled in his baleen. The hope is that he will shed the rest of the rope on his own. Unfortunately, he also has severe injuries on his head and flukes from the rope entanglement.

No. 4057 is one of only about 450 remaining North Atlantic right whales. According to a press release, more than 80 percent of North Atlantic right whales bear scars from rope entanglements, and almost 60 percent have been entangled twice. The Georgia DNR says that prevention of these fishing gear entanglements is vital for survival of the species.

North Atlantic right whales are protected under the U.S. Endangered Species Act of 1973 and the Marine Mammal Protection Act of 1972. These mighty whales were decimated by commercial whaling in the late 1800s. Since whaling was banned in 1935, right whale recovery has been limited by ship collisions and entanglement in commercial fishing gear causing whale deaths. While the population is increasing at an annual rate of 2.7 percent, there are still fewer than 100 breeding females left.