This week a handful of horses managed to get themselves into serious trouble and human heroes stepped forward to pluck them out of danger.

In Rhode Island on a 36 degree day, a horse named Dixie — who appears to be elderly based on photos and video — fell into a neighbor’s pool. The West Greenwich Fire Department and other rescue workers responded immediately and were able to pull Dixie out of the pool about 30 minutes after she tumbled in. Veterinarian Liz Lawrence reports that Dixie will be treated for her hypothermia, but otherwise is doing very well thanks to the quick rescue work. Read the whole story. 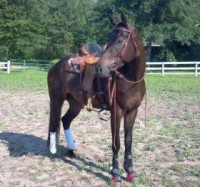 Meanwhile, in Minnesota, a five year old thoroughbred gelding named Jagger was out on a trail ride when he spooked, tossed his rider, and bolted off. Searchers on the ground used every available means of transportation, on foot, on horseback, in trucks, and on snowmobiles; but Jagger had seemingly vanished. That night the weather brought a snowstorm and subzero temperatures. Two days later, a pilot was found for a search by air and Jagger was finally located with his reins tangled around a tree, unable to reach food or water. Lucky for Jagger, as forecasts call for overnight air temperatures to plummet to 20 below zero with wind chills of 20 below to 30 below. Read the whole story.

And in Canada, an eight year old horse named Bob fell through the ice on his family’s pond. After Bob’s owners tried to pull him out themselves, neighbors and volunteer fire and rescue personnel rushed to the rescue. Ten to 12 men used ropes to basically lift Bob out of the icy water. He shows no signs of long-term damage. Read the whole story.