A family in Pennsylvania was expecting a delivery of dog food from the online pet store Chewy, but a hungry bear had other plans. Can you really blame her? At least now they know where their missing deliveries are going.

The family sent the video to Chewy – and of course Chewy is sending them a free replacement, so their dog will get its food.

Unless the bear is still hungry. 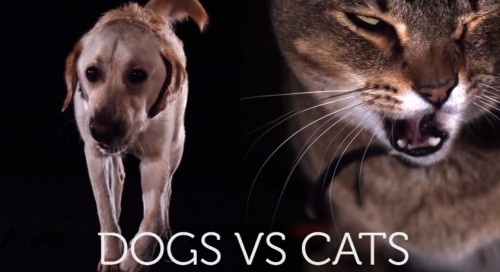 Did you know how cats and dogs drink? We know dogs make a big mess splashing water all over, while cats hardly touch the water when they drink. But, what are each of them doing to get those results? Check out the following videos to see:

If you didn’t get enough with those, here’s a longer video from Earth Unplugged with more details.

Football-mad Triton, an 11-year-old male lion who was born at the Johannesburg Zoo, is like a kitten with a favorite toy when his soccer ball comes into sight. His face lights up whenever Agnes Maluleke, the Johannesburg zookeeper in charge of the carnivore section, tosses the ball into his enclosure, and he’ll pass it and kick it between his paws and follow it wherever it rolls off to – even the water!

According to the Lion Den, games are very important for a lion’s development, just as they are for other predators: “Most of their play imitates behaviors they will use as adults including stalking and fighting. Play is an important way for cubs to learn these adult skills as well as to form strong social bonds with their companions.” However, adult male lions rarely play – while female lions (lionesses) continue to play into adulthood. Apparently no one told Triton, since he refuses to share his ball with any of the seven female lions that he shares his enclosure with.

With his impressive dribbling skills, Agnes thinks “all soccer players can come and learn a thing or two from Triton, because he’s the best soccer player.”

It just goes to show that regardless of a feline’s size – whether it’s the king of the jungle or a house panther – every kitty loves playing with toys!